be movement – Celebrating the Courage to be

be movement – Celebrating the Courage to be

For the first time ever, Noam Chomsky, “father of modern linguistics” and voted the “world’s top public intellectual”, has endorsed a publication from Singapore. This publication is a totally independent “bookazine” (part book, part magazine) called be movement, created by a new social enterprise of the same name founded in Singapore.

be movement aims to inspire people to be by celebrating the diversity and courage found in life. The bookazine is an advertising-free quarterly publication, featuring individuals, enterprises and organisations (non-profit and social enterprises) who breathe and walk their beliefs. be movement chose to exist as a pure space, where people can come and be inspired, where through reading honest, heartfelt and authentic stories, they can take away and learn something from.

For the inaugural issue, Singapore has been chosen to be the highlight, as the city state is increasingly becoming a potent hub for the transmission of ideas. The launch edition delves into the soul beneath the glitter of Singapore and features diverse people, enterprises and organisations based locally, who have firmly grasped the challenge to do things their way. Some of the highlights include Glen Goei (film and theatre director), Fredrik Härén (author of The Idea Book), Hajar Ali (the first woman to cross the ‘Empty Quarter’ in the Middle East) and Ong Tze Boon from ONG&ONG. It hopes to increase awareness on issues in the world today, such as aging and environmental sustainability, featuring exciting new organisations. There is also a section to inspire people to see the world in a new way through the idea of experimental travel.

Cassie Lim, founder, said of her inspiration to set up be movement: “Post a life-changing experience from the March 11th Japan Earthquake and Tsunami, be movement was born after a long period of soul searching. be movement is about who you are meant to be, not what society, family and friends or even you think you should be. Here we share genuine heartfelt stories where, despite human struggles and vulnerabilities, challenges and fear, people still choose to do what they believe in.”

be movement bookazine will be available at major bookstores and newsstands throughout Singapore from October 2012 onwards. It will also be available online, both as e-bookazine on www.be-movement.com and on mobile application (App) in iTunes Apps Store and android platform towards the end of October. It retails at SGD 18.90 in hard copy, with close to 200 pages of pure content in quality production. The e-bookazine and app versions will be priced at USD 5.99 per issue, with a yearly subscription at USD 19.99. In order to reach out to a wider audience, be movement will also be launched online in French and Chinese in 2013 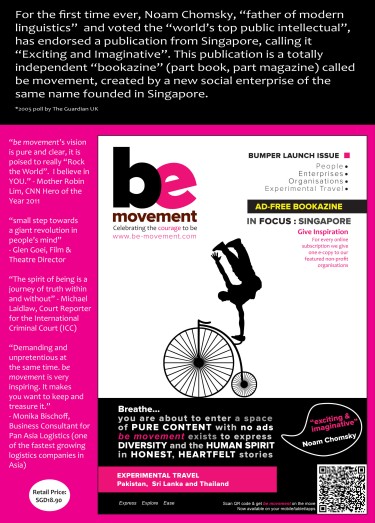 At the launch of be movement: 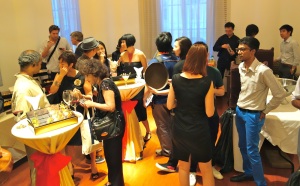 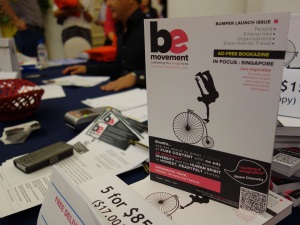 Something to keep in mind!

We’re so glad that you’re taking note of the amazing companies featured here.  🙂  We’re not linked to them in any way, so if you have questions, please contact each company directly.  🙂  Happy Browsing!

Something to keep in mind!

We’re so glad that you’re taking note of the amazing companies featured here.  🙂  We’re not linked to them in any way, so if you have questions, please contact each company directly.  🙂  Happy Browsing!